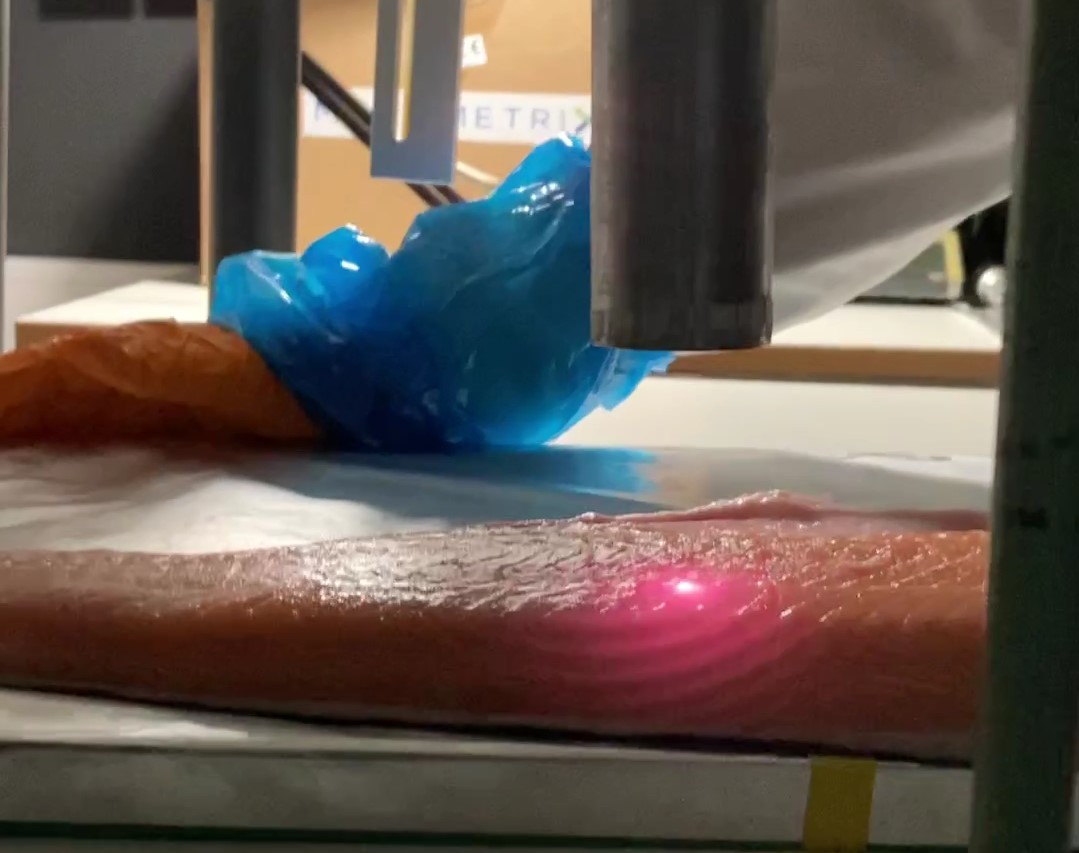 A RAMAN instrument is installed in one of Nofima's pilot plants. Here, the salmon fillet moves over the conveyor belt at the same time as the fatty acid composition is measured. Photo: Tiril Aurora Lintvedt

In Nofima we have developed methods to quickly measure EPA and DHA fatty acids in salmon fillets. These fatty acids have a number of positive health effects on humans. The recommendation is that healthy people consume EPA and DHA daily to prevent cardiovascular disease.

Norwegian farmed salmon is a good source of the marine fatty acids EPA and DHA. This is despite the fact that the content of these fatty acids has decreased in recent years because a significant proportion of the marine proteins and oils in fish feed has been replaced with plant protein and plant oils. It is also important for the farmed salmon to have sufficient EPA and DHA in their feed so as to remain healthy.

The measurements will be of great value

The importance of these fatty acids is the reason why we need to be able to measure and document the amount of them in salmon.
There are several reasons why such measurements are useful:

Currently, chromatography must be used to measure specific fatty acids. This process is both costly and time-consuming. Chromatography can only be performed in specific laboratories and one measurement costs NOK 1500 or more.

In recent years, Nofima has worked to develop a rapid and non-destructive method for measuring the proportion of EPA and DHA fatty acids in salmon fat. The method can be used on whole salmon fillets without physically touching them, and the measurement only takes a few seconds per fillet.

In just a matter of seconds, this technique can quantify a number of components in the fat, including EPA and DHA. This is done by a laser illuminating the salmon fillet, which can then be scanned quickly without any kind of physical contact.

We have tested the method on salmon from a number of different locations and feeding regimes, and it turns out to be very accurate. EPA+DHA can be measured with an accuracy of approximately ± 0.5% of total fat. The typical variation range for EPA+DHA in salmon is 4-12% of total fat. As of today, the method is excellent at making rapid measurements in a laboratory or next to the line in a production facility. In the slightly longer term, we envisage that Raman can also be put directly on the production line and measure each and every salmon fillet, but this might require robotic controlled measurements.

Relevant Raman measurement systems currently cost approximately NOK 700,000. This cost must be assessed in relation to the opportunities it can provide regarding effective quality documentation and possible quality differentiation.

Raman has mostly been used in laboratories or next to the production line. In the DigiFoods research centre, we are developing the technology so that it can be used for continuous measurements of food directly on the production lines. The results so far are very promising, and we believe that the methodology will help the food industry ensure consistent quality and less waste in their processes.

We are also collaborating with geneticists to find out whether the methodology can be used directly in breeding work to select fish with the desired fat composition.

NIR imaging spectroscopy is being used

NIR imaging (hyperspectral) spectroscopy is already being used by the food industry to make in-line measurements. The method is used for measuring parameters such as fat in salmon fillets, fat in meat, protein in chicken fillets, as well as residual blood in whole white fish and salmon fillets.

We know that NIR imaging is very good at measuring total fat content, but there has been more uncertainty as to whether it can also be used for specific fatty acids such as EPA and DHA.

The studies show that the method is not as accurate as Raman, but good estimates are also obtained using this technique. One advantage of using NIR imaging is that the technology is faster than Raman, and very suitable for taking measurements directly at production lines.

The methods have been developed at DigiFoods, a centre for research-based innovation, and they are part of Tiril Aurora Lintvedt’s doctoral work. This has been done in collaboration with Lerøy and the American company called MarqMetrix, which develops and sells Raman measurement systems. Imaging spectroscopy was performed using the Norwegian HySpex camera from Norsk Elektro Optikk, which is used in Maritech’s industrial scanner.

The centre is headed by Nofima, with Sintef Smart Sensor Systems and the NMBU (Norwegian University of Life Sciences) as its main scientific partners. The goals are to help ensure better utilisation of raw materials, a healthier population and better food experiences.

The centre is funded by the Research Council of Norway and partners. Start-up was November 2020 and the planned duration is eight years.