Roundworm in fish can be detected using new technology 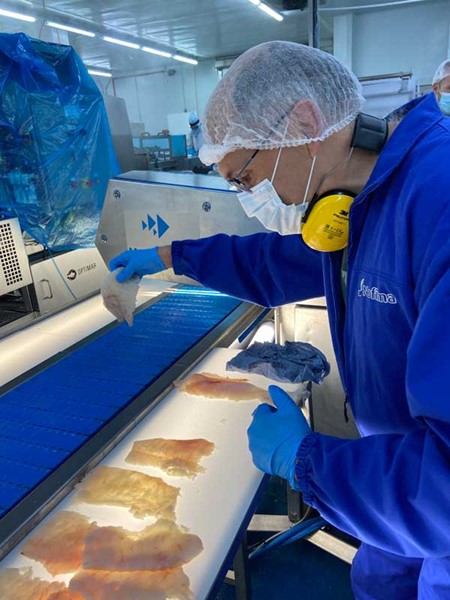 Senior scientist Karsten Heia has been working on developing the spectroscopy technology for more than 14 years, which is now commercially available. For him, it is very satisfying to be involved in testing that it works in new areas. Photo: Nofima

An unpleasant little white worm is the last thing you want to find on your dinner plate. Novel technology is now in place that allows detection and removal of Nematodes – roundworms – from whitefish fillets before they enter the dinner table.

Spectroscopic technology is already used commercially in the fishing industry to assess the quality of whole whitefish and salmon fillets.  Researchers at Nofima have now adapted it to be used to detect roundworms in whitefish fillets.

The Maritech Eye quality measurement technology has been developed by Nofima in collaboration with Maritech and Norsk Elektro Optikk (NEO). Recently, the solution was tested at the fish producer MareDeus in Portugal. They wanted to check whether the technology could also detect roundworms in whitefish. MareDeus makes lightly salted products from frozen cod that originates from Norway and Iceland.

“The tests were carried out at industrial conditions in terms of speed, temperature and humidity in the production environment. The results are unequivocal: This technology can also be applied to detect herring worms in whitefish fillets. Maritech Eye is becoming a multi-tool” says Nofima Senior Scientist Karsten Heia.

Works in many new areas

Heia has played a key role in the development of the technology, which is now being adopted in the commercial arena in both Norway and Europe. Scientists Shaheen Syed and Samuel Ortega are also members of the team.

This is how Karsten Heia explains the technology being used:

“We measure how much light at different frequencies is stopped by the sample being imaged. We combined measuring how much of the spectral light ‘disappears’ in the fillet with spatial imaging, hence structural properties of the product. Herring worms have different optical characteristics compared to fish muscle. In other words, they look different, which can be used to detect roundworms on or inside fillets using spectroscopy.

However, the challenge involves being able to observe the small nuances that distinguish roundworms from fish muscle at industrial speed.

“Typically, a roundworm is half a millimetre thick and approximately one centimetre long, and often curled up in a spiral. Within thousandths of a second, it must be possible to distinguish between shape and colour, which may indicate either a roundworm or fish muscle”, explains Samuel Ortega.

“Imaging and its analysis are now just as fast as production lines in industry. From my point of view as a scientist who has worked for more than 14 years developing this technology, it is very satisfying to be involved in testing that it works in new areas”, says Heia.

The main novelty in this context is the use of deep learning, which is the programming of artificial intelligence to extract information about the roundworms from the light signals. The signals are extremely complex, with a high degree of detail. Scientist Shaheen Syed has played a crucial role in developing the machine learning solution used in the system.

“It has been challenging to find a solution that adequately combines and separates the information in the light signal, and this has not been possible with previous tools. It is therefore extremely satisfying to have found a good solution”, says Syed.

Scientists can now conclude that hyperspectral imaging in combination with artificial intelligence is a very good way of detecting a highly undesirable ‘guest’ in fillets of whitefish. The roundworm is a type of nematode parasite that may live in the fillets of fish.

“We are talking about a small worm that we really don’t want to find in our food. Therefore, the fishing industry is very interested in technology that is able to detect and remove roundworms before the product is sent to the consumer”, says Heia.

Maritech was contacted by MareDeus with questions about whether the launched technology that measures blood quality in whole fish could also be used to detect herring worms in fish fillets. The request correlated with the work that was already underway in an ongoing project with Maritech, NEO, Prediktera and Lerøy Norway Seafood, financed by The Norwegian Seafood Research Fund, to develop solutions for detecting herring worms. At MareDeus, it was possible to get access to their production line and quickly carry out large-scale trials. During the spring of 2022, the research team and Maritech have therefore been able to carry out several series of measurements to further develop and test the technology for herring worm control. The Portuguese supermarket chain Mercadona which sells the fish products was also involved in the testing.

“In collaboration with Maritech and MareDeus, we have now tested the concept in real production, and both scientists and the companies involved are very pleased with the result. They were very interested in being able to guarantee herring worm-free fish products in their stores”, says Ortega.

At MareDeus, as with most Norwegian whitefish producers, the conventional method of scanning fillets using candling tables and then manually trimming the fillets is used. In Norway, the traditional candling of whitefish fillets in processing plants is compulsory.

“We received the fillets for spectroscopic measurement after traditional candling and manual trimming had been done. Spectroscopic measurement with a newly developed analysis algorithm, quickly made it clear to both us and MareDeus that the hand-trimmed fillets weren’t as ‘roundworm-free’ as one had expected. There is no reason to believe that it is any different in Norway – or other countries”, says Shaheen Syed.

How big is the problem of roundworms in whitefish?

“It is very unpleasant and unappetising, but usually not dangerous. If seafood is prepared properly, for example through freezer storage or proper heat treatment, there is no health risk associated with roundworms, but it is considered a cosmetic problem for the fishing industry”, says Karsten Heia.

The research is funded by the Norwegian Seafood Research Fund (FHF).

Maritech Eye was launched for whitefish in November 2020, and then for redfish in August 2021.

Nematodes is the common term for types of roundworm parasites that can be found in wild sea fish. Nematodes is a type of roundworm that usually attaches itself to the intestines of fish, entering the intestines through what the fish has been eating. Occasionally, they also make their way into the flesh of fish, and if consumed through unprocessed fish by humans, the worms can pose a certain health hazard in the form of abdominal pain, nausea and skin rashes. However, this is very rare. Roundworms die when the fish is fried, poached, dried, heavily salted or frozen. It is therefore a requirement in Norway that wild-caught fish that are to be eaten raw or semi-raw must be frozen before consumption.